TEXHA has designed a novel poultry equipment solution — Automated Depopulation System 3to1. The system enables harvesting of one third of the poultry population in the age between 28 and 32 days and distribution of the remaining broilers across the vacant space for further rearing. The technology has been tested at TEXHA Research and Development Center and proved its high efficiency. Novel poultry equipment suits perfectly for all types of poultry farming enterprises that utilize the strategy of intermediate young chick harvesting for sale.

During the broiler rearing process, many poultry farming companies face the need to depopulate the growing flock or perform intermediate poultry harvesting. This strategy achieves simultaneously 2 important goals: harvesting of young chicks for sale and distribution of remaining growing broilers across the larger area of vacant space.

Usually flock depopulation is performed manually, where a certain number of broilers is removed from each cell by hand for further harvesting. This is a highly time-consuming and labor-intense process, which is especially challenging at the large farms. Automated depopulation system by TEXHA enables both time and labor saving

3to1 is a semi-automated system that operates with minimum involvement of stuff. Poultry equipment with depopulation feature is based on the TEXHA’s cage battery concept with AUTOMAT or ROBOT system. Cage battery is assembled from sections with 3 cells equipped with the removable partitions. Each middle cell is equipped with the dedicated bottom lowering system and the modified KoChiBo feeder with feed supply valve. Furthermore, the automated and robotized harvesting systems, AUTOMAT and ROBOT, as well as other systems and machines continue to operate as usual.

Therefore, one third of broilers is removed from the 3-cell section, and remaining birds naturally spread across the common territory. Immediately before the final harvesting, the partitions are returned back in position.
The harvesting then proceeds as usual using the AUTOMAT or ROBOT system. 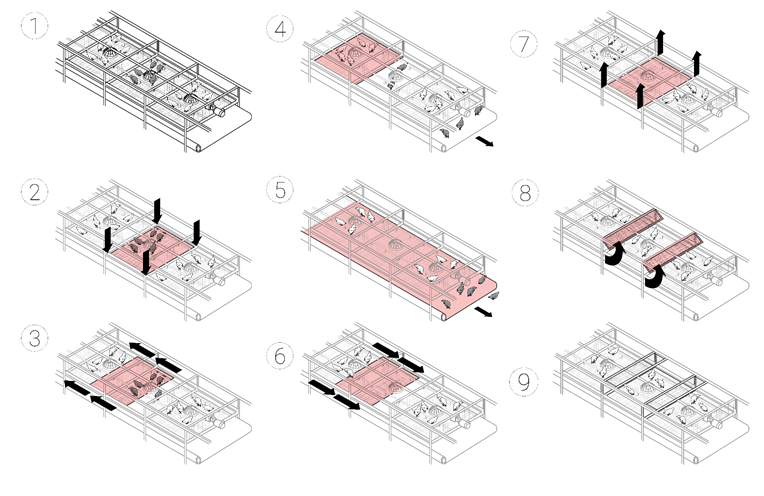 Design by -
Home » News and Articles » 3to1 — Automated Depopulation System